How Lauren Henderson Found Her Wings

Find out how ileostomy surgery helped Lauren overcome her health challenges and live her best life. 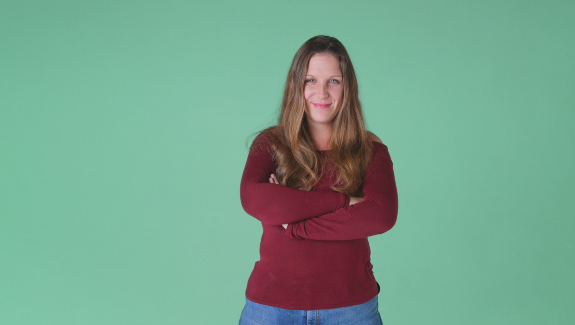 Lauren Henderson’s mental well-being was left in tatters when a four-year battle with Crohn’s Colitis took away her teaching career.

After unsuccessfully resorting to chemotherapy and several other severe medications, her health continued to spiral out of control. She describes this period as primarily “lying on the bathroom floor in the foetal position” and “going to the toilet 40 times a day.” But despite all this, the idea of wearing an ostomy pouch was still too terrifying for her to contemplate.

Fast forward a few years later and Lauren’s life is unrecognisable. Ileostomy surgery has given her the confidence to get married, raise a child, and even set up a charity to help other people living with stomas – Purple Wings. In the following words, Lauren recounts the turning point in her ostomy journey and discusses how she handled bouts of poor mental health.

In 2008, just before Christmas, my life was about to take a turn for the worst. I’d actually go so far as to say that it changed my life forever. As a 20-year-old university student, who had never suffered illness in her life, I started going to the toilet far more than usual.

At first, I thought it was most likely food poisoning, so I waited it out for two weeks. But when it didn’t pass, I decided to go to my GP, who told me to give it another two weeks and then they could investigate further.

Fast forward to the following April, and I was still waiting for answers. Why was I going to the toilet up to 40 times a day? Why was I in chronic pain and exhausted? Mentally, I felt disgusted and embarrassed.

Shortly after, I was booked in for a colonoscopy. I had never been sedated before and, of course, no one had ever prodded a camera in that place! The results left me mortified and deflated. They told me I had Crohn’s Colitis.

“My face started to balloon, and I had no idea why – no one had spoken to me about any side effects.”

At the recommendation of my clinician, I started taking steroids and anti-inflammatory tablets. I also had to have an enema each night. All of this resulted in me lying on the bathroom floor in the foetal position, in agony, trying to keep the medication inside my inflamed colon. I laid there and sobbed most nights at what my life had become.

Mentally, I was a wreck. And it wasn’t just the embarrassing moments of suddenly needing the toilet, either; the steroids were having a significant impact on my confidence. My face started to balloon, and I had no idea why – no one had spoken to me about any side effects. I quickly put on weight and experienced terrible mood swings; all I wanted to do was eat.

Then, the same weekend I was diagnosed, something awful happened – my first accident. I remember standing in my bedroom with blood and diarrhoea on the floor. Little did I know this was going to become a daily struggle for me. It controlled my life.

I was a young woman about to start my teacher training course and, to my surprise, I was also pregnant. Unfortunately, my boyfriend and I had just split up, and he decided to step away from the situation, leaving me to cope as a single mum. It was just all too much. By this point, I was experiencing a mental breakdown.

“Working full-time and being a single mum meant that I had to keep going. Rest was not an option.”

My illness was controlling every part of my life. Working full-time and being a single mum meant that I had to keep going. Rest was not an option. Eventually, I saved a little money for a budget Benidorm break and decided to leave my job.

I was now off the steroids (thank goodness!), and my swollen face was beginning to look like me again. As I sat on the aeroplane ready to take off, I had a screaming 16-month-old boy who wanted to get down and run. Of course, this wasn’t an option, so I bounced him off my knee and sang silly songs, all the time in agony and wishing I hadn’t bothered going on holiday. I was red, sweating and desperate for him to calm down.

Then, he laughed. Someone behind me was busy entertaining Teddy. I turned around to see who was pulling faces, and there was Kieran. The very same man who would become my future husband. As I write this, we have been married seven years and Kieran has been nothing short of amazing about my illness.

“Pre-surgery, I was scared. I had nightmares about this bag hanging off me and had no clue what to expect.”

The same day Kieran proposed, I received ‘the call’ to say I needed to have an operation. By this point, I had now tried Humira – injections in my tummy and Infliximab – every eight weeks, but nothing worked. I had even taken a strong dose of chemotherapy, but that also did nothing to assuage my symptoms.

I was frightened to go out, I was picky about what I wore (in case I had an accident), and I didn’t see my friends. I was completely isolated. Work was fierce, and even though I tried to go back, I just couldn’t do it. My mental well-being was crushed, and my physical health was in tatters – and yet, on the outside, I looked fine!

Pre-surgery, I was scared. I had nightmares about this bag hanging off me and had no clue what to expect. Perhaps my biggest worry was that I would have a medical appliance to deal with daily. The day before my surgery, I looked at my son as he sat eating his beans on toast. I watched his happy face and wondered if he could sense the sickness rising inside me – the pure fear.

That said, I was wheeled down to surgery feeling pretty positive. I was lucky, you see, because the pre-op was with my stoma nurse. She showed me what an ostomy bag looked like and, I’ve got to admit, it was completely different from the images displayed by the demons in my head. The staff handed me a small, opaque ostomy pouch – and it looked kind of cute! It was a Dansac NovaLife pouch.

At that very moment, I looked at my mum and burst out crying. I realised that a tiny change in my plumbing system was going to give me my life back. But what I didn’t expect was that surgery would also give me a more fulfilling life. I could now be the mum I wanted to be and continue my job as a career-driven teacher. I could go on without fear. This was also partly thanks to Kieran, who was terrific after my surgery and was just so happy to see me well.

“My advice to anyone who is about to have surgery or already has a stoma is to connect with other positive-minded people.”

After my surgery, it took a while to adjust, and there were times when I hated my bag. But I have to be honest; I felt much happier. I previously thought that I would need to buy new clothes and plan every trip meticulously, but I couldn’t have been more wrong. My illness was the disabling factor – my stoma, on the hand, was helping me live without worry.

My body image hadn’t changed; it just shifted. I see my bag now as part of me, and I don’t see myself as anything other than normal. In fact, people are always really surprised when I tell them I have a stoma.

My mental health was better post-surgery, too. After feeling poorly for more than four years and having no control over my toilet habits, I was finally free. I understand that many other people don’t feel like this straight away. And that’s why I started the Purple Wings Charity, to help people with a stoma regain confidence.

For many people living with a stoma, they don’t accept that they have one. For me, you have to give some tough love and ask, “what can you do?” I want people to understand that life throws us curveballs, and, yes, it would great to not need a stoma, but now it’s a case of living and not just existing. I am living because I have a stoma.

My advice to anyone who is about to have surgery or already has a stoma is to connect with other positive-minded people. Try and simplify what it means to have a stoma – it is just a change in your plumbing system. After all, we all have to poo!

Hobbies, routines, experiences — your story can inspire others.

We want to make it as easy as possible for you to navigate our website. Please select your country and preferred language to ensure that you see customised content and accurate product availability information.