Having a stoma, temporarily or permanently, is a big change in a person’s life. For some people, it might take a lot of time and adjustment to accept life with a stoma. Others, however, adjust more quickly. How you deal with it depends on you and your situation — there is no right way or wrong way to living life with a stoma. We have gathered the stories of other people living with a stoma who share their experiences.

Diagnosed when I was 15 years old

As a child and in my teenage years, I was very active and did a lot of sports. When I was 15, I was diagnosed with Crohn’s disease following a period when I became more and more tired. I was treated with medicine, but I never came back to my normal physical level again. There were lots of problems and pain, and at the age of 18, I had my first surgery due to stricture in the large bowel. After surgery I had 5 or 6 years of good health and got my education in the financial sector.

In and out of hospital

From the age of 24, my problems started to reoccur. Pain was more frequent, and in the last years before my stoma surgery, I suffered a lot. I woke up in pain, was in pain during my working hours, spent most of my time at home in bed, and didn’t have much of a social life — I had a bad quality of life.

I had a fever very often, and I was in and out of hospital. Several tests and scans were carried out, but nothing revealed the extent of my problems. I was treated with various types of medication, and the doctors hoped the medication would solve my problems and that Crohn’s disease would calm down. This didn’t happen and things gradually became worse. The fever was treated with antibiotics because of symptoms of a urinary tract infection. I was discharged from hospital, but things didn’t improve, and I was soon back as an emergency case, as it had come to a point where I was no longer able to walk. After further tests, it was discovered that both the pain and fever were caused by an abscess and fistulas in my bowel. I was then transferred to a hospital with a specialised unit to deal with such problems and specialist surgeons who would give me a better chance of recovery after surgery. I was in such bad shape that I needed nutrition intravenously to get ready for an operation.

When I was told that I was going to have stoma surgery, I did not know what a stoma was. I had never heard of one before. I had seen information about it in leaflets on hospital walls, but had never really paid much attention to them because I thought it was something that affected elderly patients and not someone like me. I had heard of a colostomy bag but never heard it referred to as a stoma. When I woke up after my operation, I had three stomas: an active ileostomy, a mucus fistula, and a colostomy without function.

The first few weeks after the stoma surgery were quite difficult, as I was trying to come to terms with a very big change in my life. The stoma leaked quite a lot in the early stages as the output was very loose and more like water. When it leaked at night, it was a bit disheartening as I needed cleaning and fresh sheets, and the faeces burned my skin. My first thought was: Is this how it is going to be for the rest of my life? But it was not.

The good thing about having a stoma was that I was able to be positive about the future. I had less pain, I was able to eat more, and I was on my way back to a more normal way of life.

Coping with my new life

I learned to cope with having a stoma in due course. My experience is that the longer I had it, the easier it got. I have learned to deal with most situations by being well prepared, such as making sure to always have a spare bag with me, especially if I am far from home.

At first I thought that the stoma would affect my social life in a negative way. I didn’t think I would be as able to do many of the things that I had enjoyed, such as going to support my local football team and going to watch cricket in summer. My friends and family have all been very supportive and helped me with everything that I might need. I don’t think any of them have changed their perception of me.

My advice to others with a stoma or to those who are going to get one soon: Don’t worry too much as you can still lead a relatively normal active life.

I live together with Claire, and we have been together for 10 years. She has been through all my ups and downs together with me, and she has been a tremendous support. Before I had my last operation, where the surgeons closed the mucus fistula and the colostomy, they told us that the operation in the lower regions might influence my fertility, so they suggested we try to have children before the operation. We did, and luckily we did not have to wait long before my wife was pregnant.

Our daughter Millie was born a couple of months before my second operation, and it is fantastic. Sometimes I think that if it hadn’t been for the operation, we would never have had our little girl. Claire started working part-time as a teacher when our daughter was 8 months old, and I took the maternity leave. Being so close to her and following every little step of her growing up is something I never would have missed. I can honestly say that the past year since my daughter was born has been the happiest year of my life. 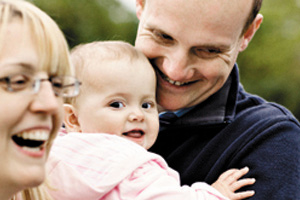 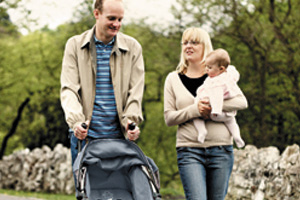 By opting out, Dansac.com will not save your personal preferences for a better browsing experience.

To prohibit this site from saving your preferences, click Confirm.